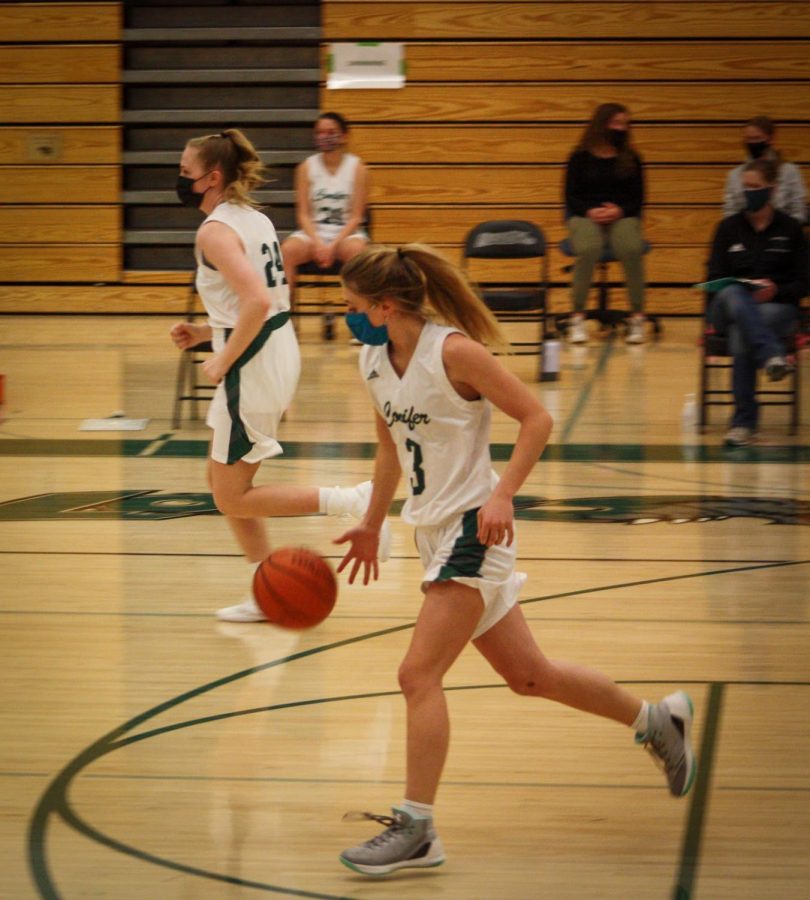 Junior Olivia Sinnett brings the ball down the court

The team has been working very hard this year, with high goals for the season. The team has a new coaching staff this year, and teammates hope that this change will bring a positive and exciting season.

“We have girls who didn’t play last year, some who took a hiatus, and a lot of girls who we didn’t play with at all,” sophomore player Ella Johnson said. “The camaraderie is definitely there. I think that something we need to focus on is that this coach has been able to build a strong team.”

The team feels that this game had a lot of improvement, especially on communication towards each other on the court. The team also feels that there has been a growth in support for each other and that a strong bond is being created. The team continues to work on bonding, but it has been a challenge with social distancing rules.

“We bond over a lot, through bus rides especially and nights where we walk the McDonalds drive through,” sophomore Roslyn Baker said. “A lot of it has been before games and practices where we are all just kind of sitting and talking… I think overall that’s just how we bond. There are also some crazy plays or messed up practices, we kind of just laugh about it together.”

The Conifer girls focused on fighting with all their might against Littleton. The team plans on working on new plays they have learned to grow their confidence in the plays. This game, however, has given the team more confidence in skills such as communication and rebounds.

“We need to use this time, cause it’s only a seven week long season, I think what motivates us is that knowledge,” Baker said. “This is more of a time for us to improve our skills.”

The final score for the game was 56-14, giving the win to Littleton High School. While Conifer feels it was an unfortunate loss, the team is staying positive and focusing on highlights and the improvement they have made so far. The team is going to continue bonding and building chemistry as a team.

“The score doesn’t look amazing,” Johnson said. “However, what I think people need to focus on is our team is really good about keeping morale high. Even when we get tired, we’re all so supportive of each other.”

The team is scheduled to play on Monday, February 8, against Standley Lake High school. The game will be held at Conifer. Fans can watch the game through a livestream.

“Aside from the actual skills for basketball, our team has something that a lot of others don’t,” Johnson said. “And that’s just those positive attitudes and that type of teamwork.”